A GHOST OF A CHANCE by MINNETTE MEADOR (paranormal/romantic comedy) 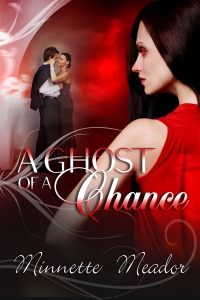 Our latest REVOLVING BOOK is by MINNETTE MEADOR!

TITLE: A GHOST OF A CHANCE

A GHOST OF A CHANCE

Keenan Swanson is your typical, everyday graphic designer. Well, except for the hundreds of pesky, prank-loving poltergeists that make his life interesting (in a Chinese curse sort of way). He finds his situation precarious yet manageable—until witty, smoking-hot coworker Isabella enters the scene and Keenan decides he wants her all for himself. With a horny succubus who has other ideas, a burly city cop determined to lock Keenan away, and an evil entity who’s hell-bent on using Keenan’s seed to create a living demon, the reluctant psychic realizes he just might not come out of this alive—or with heart intact.

Somewhere between thirty and dust…red hair, blue eyes…six kids, one slightly used husband, and any number of pets from time to time… wannabe hippy… wanttheirmoney yuppie… pro musician and actress for 20 Years… native Oregonian… lover of music, beauty, and all things green. Willing slave to the venerable muse. Minnette currently resides in Portland, Oregon with her husband, having replaced the children with one dog. The dog, Pierre, pretty much runs the show.

All contests will be listed on my facebook page: http://www.facebook.com/profile.php?id=637053209 and on my website: http://www.minnettemeador.com/ I am having contests throughout my promotional campaign and giving away the following yummy items: 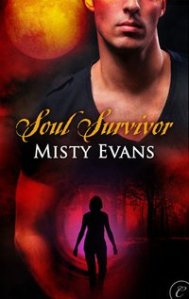 Our latest REVOLVING BOOK is by MISTY EVANS!

Haunted by tragedy, FBI profiler Rife St. Cloud is driven to find the person who brutally attacked six women. Unfortunately the only survivor, Keva Moon Water, has no memory of what happened, and the evidence makes her the prime suspect.

Keva cannot die. She has waited a thousand years to be reunited with the man she loves, whose soul sleeps within Rife. Though he refuses to believe her claims of immortality, there’s no denying the passion that burns between them. Keva desperately hopes their sexual connection will be enough to awaken Rife’s memories of the love affair that started a war and bound their souls together for all eternity.

But when Keva’s own memories come trickling back, she realizes that a future with Rife depends upon confronting the mistakes of the distant past…

“This story took some unexpected turns (and features a great bad guy…I’m all about the bad guy!) that kept ME turning the pages.” – JB Lynn, author of The First Victim http://bit.ly/mFWAGx

Misty Evans writes the award-winning Super Agent Series, Witches Anonymous series, and now her new Lost Worlds series with Carina Press. Her debut novel, Operation Sheba, Super Agent Series Book 1, won the CataNetwork Reviewers’ Choice Award in 2008, a CAPA nomination in 2009, and the New England Reader’s Choice Bean Pot Award for Best Romantic Suspense in 2010. Operation Sheba was the number one Kindle Romantic Suspense book and a Top 10 Kindle bestseller for over a month in 2010. I’d Rather Be In Paris, the second book in her Super Agent Series, was nominated for a 2009 CAPA for Best Romantic Suspense, and along with the third book in the series, Proof of Life, was a Top 100 Kindle Bestseller in 2010.

Misty is currently at work on the next books in all her series. She likes her coffee black, her conspiracy stories juicy, and her wicked characters dressed in couture.

FORESHADOWERS: THE SEEKER OF LEGENDS by PURPOZ (urban fantasy/sci fi)

Our latest REVOLVING BOOK is by PURPOZ! (aka Kimberly Purpoz)

TITLE: FORESHADOWERS: THE SEEKER OF LEGENDS

Joanna Whitewolf is starting her junior year in college only to discover that she is not who she thinks she is. She discovers that she is a foreshadower who is destined to destroy the Underworld and to bring peace to the universe.

Even though she is a late bloomer to her powers, she is just starting to learn how to use them. Joanna is given “The Book of Legends” by her grandfather. She is the seeker of the ancient book.

Darc Landor, The Prince of Darkness, wants to kill Joanna and to take “The Book of Legends” in order to keep the prophecy of the foreshadowers from coming true. Darc Landor sends a demon name, Samantha to steal the Book of Legends.

Thomas Wellington, a dashing wealthy vampire, saves Joanna from the evil claws of the dark army’s tracker. His mysterious charm draws her in and sweeps her right off her feet.

Will Joanna learn how to use her powers in time? Will Thomas and Joanna find The Book of Legends before it gets into the wrong hands? Join the magical world of the foreshadowers, as you enter their realms of adventure.

Kimberly Purpoz has been a professional writer and author for over 12 years. Kimberly currently writes under the following pseudonyms: Kimberly Purpoz and Purpoz. She is the author of “Age of Innocence”, “Foreshadowers: The Seeker of Legends, and the upcoming motivational book, “Purpose Lies Within: A Motivational Book for the Heart and Soul.” Purpoz is a graduate of Georgia State University. She is a motivational speaker and speaks for Great Black Speakers Bureau. Our latest REVOLVING BOOK is by SALLY MACKENZIE!

WHERE YOU CAN BUY IT:

Indiscretion Is Just the Beginning…

One night of slight overindulgence–or, all right,
he was drunk–and Stephen Parker-Roth finds he
must betroth himself to prevent yet another
scandal. But his “intended” is lovely, a redheaded
beauty under her horrendous, unfashionable
bonnet, and before long, he’s congratulating
himself on compromising such an excellent
candidate–and anticipating what other
naughtiness they’ll get caught at before the
wedding…

Lady Anne Marston has long since given up any
thought of marriage. That is the price she pays for
the mistakes of her past. But one little
conversation with a handsome rogue should never
have led to a sham engagement. Even if it did end
in a rather shocking kiss…in broad daylight…on
the front step of London’s premier gossip. Now,
trapped between a secret and a lie, Anne must
somehow disentangle herself from this charming,
maddening man before the truth comes out–or
her heart gives in…

*Starred review* “A wonderful array of characters fills the pages of this romance, including the slimiest of villains.” ~ Shelley Mosley, ALA Booklist

“…the enjoyable blend of passion and humor will please MacKenzie’s fans.” ~ Publishers Weekly

“…another delicious romp…dramatic and tense and very well done…Using her wonderful ability to combine humor with the serious, and her ability to write all those witty and delightful interchanges… Sally MacKenzie has penned another winner with The Naked King.” ~ Debby, Single Titles
Link:

And if you want to READ CHAPTER 2, it’s on my blog beginning here: http://sallymackenzie.blogspot.com/2011/05/naked-king-chapter-2-begins.html

USA Today bestselling author SALLY MacKENZIE
writes the funny, hot, Regency-set Naked nobility
series for Kensington Zebra. Her seventh and final
(at least for now) Naked novel, The Naked King,
releases June 7, 2011; she’ll be starting a new
series for Kensington in 2012. Her books have
been translated into Japanese, Norwegian,
Portuguese, Russian, Slovakian, and Spanish. Sally
graduated with a B.A. in English from the University of Notre Dame in the first class of women. She’s a Cornell Law School dropout, former federal regulation writer, recovering parent volunteer, and mother of four mostly grown sons. A native of Washington, D. C., she still resides in suburban Maryland with her husband.

Kensington, my publisher, is running a contest on Facebook. Tell them why you love me (blush) by 6/15 to be eligible to win signed copies of the ENTIRE NAKED series. Click through on the postcard that’s on my blog here: http://sallymackenzie.blogspot.com/2011/05/naked-postcard.html

I’m also running a contest until 6/15 to win one of my books. Details are on my blog here: http://sallymackenzie.blogspot.com/2011/05/naked-noble-contest.html

I’ll be signing at the Romance Writers of America National conference. The “Readers for Life” literacy autographing will have hundreds of authors and is open at no charge to the public. It’s Tuesday, June 28, 5:30 to 7:30 at the New York Marriott Marquis in Times Square.

Our latest REVOLVING BOOK is by ANNA JAMES! 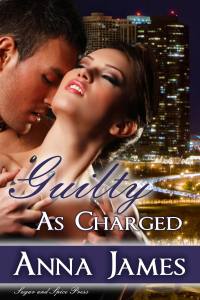 Passion ignites between Nicole Bradford and Max Paradis the second they lay eyes on each another. Nicole seems to be everything that Max is looking for in a woman. She’s sweet and loving and incredibly sexy. But looks can be deceiving. Hadn’t he learned that the hard way?

Nicole is crazy for Max. He is sensitive, caring and his kisses are to die for. But when secrets from her past are revealed will she be found innocent or is she guilty as charged?

Manic Readers:
“Guilty As Charged is a nice love story, with enough suspense that you really want Nicole to solve the mystery and get back to her comfortable life. I liked the characters and the settings, and enjoyed the design background that Nicole can’t help allowing coming to the fore. It would be nice to see Reed’s story or the younger sister as she heads off to college. A good summer read, or one to take on a trip on your e-reader.” ~ Patrizia Murray

Dawn’s Reading Nook:
“If you are looking for a hot, character rich storyline, then grab Guilty as Charged. I cannot wait to read book two and see what happens next for the Bradford Sisters”. ~ Dawn Roberto

Goodreads. com:
“A wonderfully written traditional romance. The story is light and quick while still having enough intrigue and depth to keep your interest. You will flip through the pages excited to see what happens next. This is what I would call a terrific beach read.” ~ Aubrianna Hunter

AUTHOR BIO:
I was born in Connecticut and lived there until I was nine years old. My family and I spent the next eleven years living in Williamsville, a suburb just outside of Buffalo, NY. I returned to Connecticut after receiving my associates degree in Engineering Science and went on to receive a bachelor’s degree in Mechanical Engineering. I continue to live in Connecticut with my husband and children. I am a romantic at heart and enjoy reading and writing romance novels.