FORESHADOWERS: THE SEEKER OF LEGENDS by PURPOZ (urban fantasy/sci fi) 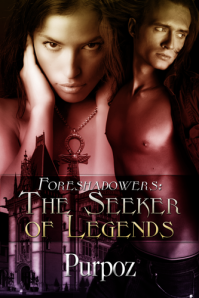 Our latest REVOLVING BOOK is by PURPOZ! (aka Kimberly Purpoz)

TITLE: FORESHADOWERS: THE SEEKER OF LEGENDS

Joanna Whitewolf is starting her junior year in college only to discover that she is not who she thinks she is. She discovers that she is a foreshadower who is destined to destroy the Underworld and to bring peace to the universe.

Even though she is a late bloomer to her powers, she is just starting to learn how to use them. Joanna is given “The Book of Legends” by her grandfather. She is the seeker of the ancient book.

Darc Landor, The Prince of Darkness, wants to kill Joanna and to take “The Book of Legends” in order to keep the prophecy of the foreshadowers from coming true. Darc Landor sends a demon name, Samantha to steal the Book of Legends.

Thomas Wellington, a dashing wealthy vampire, saves Joanna from the evil claws of the dark army’s tracker. His mysterious charm draws her in and sweeps her right off her feet.

Will Joanna learn how to use her powers in time? Will Thomas and Joanna find The Book of Legends before it gets into the wrong hands? Join the magical world of the foreshadowers, as you enter their realms of adventure.

Kimberly Purpoz has been a professional writer and author for over 12 years. Kimberly currently writes under the following pseudonyms: Kimberly Purpoz and Purpoz. She is the author of “Age of Innocence”, “Foreshadowers: The Seeker of Legends, and the upcoming motivational book, “Purpose Lies Within: A Motivational Book for the Heart and Soul.” Purpoz is a graduate of Georgia State University. She is a motivational speaker and speaks for Great Black Speakers Bureau.