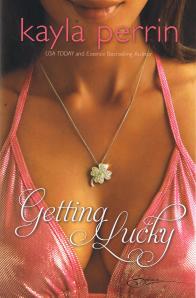 THE REVOLVING BOOK FRIDAY EDITION IS BY KAYLA PERRIN

SYNOPSIS:
In just four months, lucky-in-love Annelise is going to become a mother. But before she hits the delivery room, she’s got one last piece of business to take care of—hooking up her single girlfriends with a pair of sexy brothers on a special weeklong getaway.

Lishelle and Claudia are more than ready for some no-strings-attached flings.  And soon, Lishelle and gorgeous, insatiable Jared are setting the sheets on fire. Even back in Atlanta, the sex is amazing. So why is she still so bothered that her ex-boyfriend—the one she dumped—is getting married?

Meanwhile, Claudia can’t get enough of Chad’s expert toe-curling, scream-inducing moves. But introduce him to her high-society friends? Puh-lease. Sure, he’s funny, smart, and devoted—but without movie-star looks or a matching bank balance, he’s hardly Claudia’s ideal man. If that makes her a bitch, fine. She has an image to maintain.

But when tragedy strikes, it soon becomes apparent to the friends that they need to rethink what’s truly important in life. Because while a hard man is good to find, it takes more than luck to keep him!

A review for GETTING EVEN:
“This story of exquisitely plotted revenge will have every woman who has ever been ‘done wrong’ quietly cheering… This is sexy erotica.” —Library Journal

“Getting Even is one wild ride! Kayla Perrin is an author who belongs on your must read list.”
—Romance Reader at Heart

“[A] writer that everyone should read.”–Eric Jerome Dickey

“Kayla Perrin has proven she can write a sensual love story…while keeping the edginess of the story upfront.”-Multicultural Romance Writers

“Perrin peppers the swiftly moving plot with a delicious girl-done-wrong-but-keeps-her-spirit-intact message. Perrin’s growing fan base is sure to welcome any sequel.”–Publishers Weekly on Single Mama Drama

“Perrin is an author who belongs on your must-read list”.–Romance Reader at Heart

Kayla Perrin is a USA TODAY and Essence bestselling author who has written more than 40 books.

She resides in southwestern Ontario with her young daughter. She has a bachelor of arts in English and sociology and a bachelor of education, having entertained the idea of becoming a teacher—but she always knew she wanted to be a writer.

Teachers were being laid off in Toronto when Kayla graduated with her B. Ed. Frustrated, she used her time to pursue her lifelong dream of becoming a published author and proved that dreams can come true! Indeed, not landing a teaching job was a blessing in disguise. In eight years, she has had twenty-three original releases hit the shelves with three more scheduled for 2006.

Kayla’s novels have received plenty of accolades and awards. She has twice had books voted onto Romance Writers of America’s Top Ten Favorite Books of the Year list, nabbing the number two spot for her 2002 release, Say You Need Me. She has also been the recipient of a Career Achievement Award from Romantic Times Magazine for multicultural romance (2002). In 2001, she received an Arts Acclaim Award for her writing from the city of Brampton.  Kayla’s novel, Sweet Honesty, also voted an RWA Top Ten Favorite Book of the year, was optioned to be made into a movie of the week by Black Entertainment Television.

In 2005, her novel Gimme an O! received rave reviews from Publishers Weekly, The Globe and Mail, and even Entertainment Weekly magazine. Getting Even (Kayla’s first erotica novel) launched Harlequin’s SPICE line in May 2006.

SNEAK TEASE:
In four months, I am going to become a mother.

“You felt the baby move?” Claudia asks, her eyes lighting up.

Claudia squeals in delight then places her hand gently on my ever-growing stomach, as if hoping to catch the baby in action. “I can’t believe it. Before we know it, you’re going to have a baby.”

“I know. Amazing how things can change in a year.”

Last year, I was in the dumps when my marriage ended. My husband, Charles, was having an affair. But worse than that, I found out he was embezzling money from the Wishes Come True charity, where he’d been a member of the board. Dom was an auditor investigating the embezzlement and, long story short, we fell hard for each other. One minute, my life had been at its lowest point being married to a man who didn’t love me, and who had become the subject of a huge public scandal. The next, I was on cloud nine, never imagining that I could be this happy.

The happiness of the moment dissipates as my eyes land on the newspaper Claudia has spread on the table. “You think she knows?” I ask.

Claudia shrugs. “Maybe. Probably. She works in the news. She must have heard something at the station.”

“Then again, maybe not,” I say. “It’s not like she does the entertainment beat. And she doesn’t work weekends. So…” I let my statement trail off as I take a seat across from Claudia, figuring my words are wishful thinking at best.

I look at the picture in the Atlanta Journal Constitution she’s been reading, upside-down from my vantage point. But I can still make out the photo and the headline: One of Atlanta’s Most Eligible Bachelors Is Off the Market.

“Then again,” Claudia begins, “even if she’s heard, it’s not like it’s a big deal. She’s over Rugged.”

I meet Claudia’s eyes and stare at her for a long moment, wondering if she believes her own words. Sure, Lishelle has told us over and over again that she doesn’t want a relationship with Rugged. She has stressed that he was simply a fling. And granted, she’s the one who broke up with him. But still, I have never quite believed that she wasn’t really into him.

Lishelle went through a bitch of a breakup with a guy she was crazy about before she met Rugged—although breakup isn’t the right word, since Glenn wasn’t hers to begin with. I know how hard it was for me to learn my husband was cheating on me, so I can only imagine that it was far more devastating for Lishelle to discover that her college flame—the one she still held a torch for—lied about being married when he came back into her life years later. The prick had used her for her money, stringing her along real good until he was able to steal a ton of cash from her. Ever since that betrayal—and considering she was also married before but divorced because her husband cheated on her—she’s been understandably guarding her heart.

At least, that’s my opinion. Because with Rugged—a local rap sensation and six years her junior—she was a different person. Happier, more vibrant. And she hasn’t quite been the same since she told him that their relationship could never go anywhere, and subsequently ended things with him.

Still, I say to Claudia, “I guess you’re right. She’s the one who broke up with him.”

“Exactly,” Claudia stresses, and then her eyes flit over my shoulder. Quickly, she grabs the newspaper, folds it and tosses it under the booth. Which tells me Lishelle has arrived.

And it also tells me that what Claudia just said—that the news of Rugged’s engagement will be no big deal to Lishelle—is hogwash.