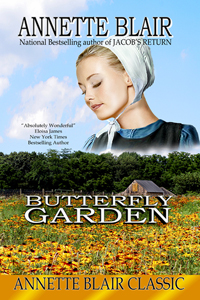 Joanna D’Angelo: I am a great fan of Annette Blair’s writing – I read her previous historical romance “Jacob’s Return” set in an Amish community and all I can say is Annette’s stories are lush with sensuality and rich with emotion. Her books flow with the beauty of a fine romantic film.

WHERE TO BUY THE BOOK:
AMAZON KINDLE: http://tinyurl.com/8xszxzg Price: $2.99

LACHESIS PUBLISHING: http://tinyurl.com/84qt9zq $4.99
LACHESIS IS OFFERING A 25% DISCOUNT ON BUTTERFLY GARDEN AND MORE!
JUST USE THE FOLLOWING PROMO CODE AT THE CHECKOUT: RevolvingBook123111

Amishwoman Sara Lapp, all but shunned for studying with the local doctor to become a midwife, is shocked that, after months of waiting, her first call comes from “Mad” Adam Zuckerman, a self-appointed outcast. Adam doesn’t want her to attend at a birth, but to tend to his children because his wife has died in childbed.

Adam wants to love his children, but he is afraid he will hurt them in the way his father hurt him. Without his late wife, Abby, to protect them, Adam must find someone else to care for the girls. He can think of only one woman brave enough, Spinster Sara Lapp, the little midwife whose passion for things beyond her control is greater than is good for her.

Though Sara knows the four little girls belong with their father, how can she leave them with a man who seems not to care for them? As much as she loves and wants the girls, she will only take them long enough to teach Adam to love them. Then Adam falls from the barn loft and Sara moves in to look after him. But in the Amish community a man and woman living together must marry or be shunned. The Bishop takes a stand and Sara and Adam are forced to face the greatest challenge of their lives.

“Fans of the TV show “Dr. Quinn, Medicine Woman” will adore this novel! Sara came across to me as almost a mirror image of Dr. Quinn. She is strong when need be (stubborn), stands up for those in need (sharp tongued), and has so much love to give everyone. She also must deal with the Amish ordnung (rules) which makes everything near impossible. I found myself cheering her on to victory. The author, Annette Blair, has a real writing talent. She inserts tiny things that the reader does not immediately notice, but makes the reader come to care for the characters as if they were kin. You may need tissues nearby at some points of the story. Another award winner that I cannot recommend highly enough.” Detra Fitch, HUNTRESS REVIEWS

“Those of you who are fans of Annette Blair or Amish romances will be thrilled with her newest book! It seems like forever since Blair’s first Amish romance JACOB’S RETURN was on the shelves. Her second … set in Ohio this time, is every bit as good as her first. I found myself transported …” Shelby, ARR

“A love story as memorable as the characters who share it… richly detailed…warm, witty, touching. A top-notch read. A gifted writer. Debbie Jett, RRAH

Former prep-school administrator and award-winning author Annette Blair owes her theme of “Magic with Heart,” to Salem, Massachusetts. The national bestseller writes single titles for Berkley Sensations and Vintage Magic Mysteries for Berkley Prime Crime. And thanks to Lachesis Publishing, her historical backlist can soon be found on an e-reader near you.