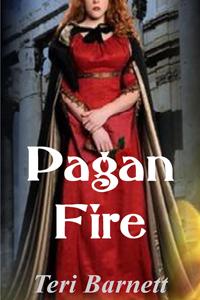 WHERE YOU CAN GET TERI BARNETT’S OTHER ROMANCES:

As the cleansing fires of Beltain burned and the villagers danced, Maere cu Llwyr witnessed the garrote murder of her parents at the hands of her father’s brother. Born with the triple signs of the goddess, legend tells that whoever shares Maere’s bed first will also share her healing power – and her uncle, Eugis, has vowed it will be he. With her mother and father out of his way, he hides Maere in a convent with plans to retrieve – and bed her – on her eighteenth birthday.

Maere carries no memory of the horrific events of that Beltain night. All she knows of her childhood is contained in remnants of dreams and a growing ability to heal through touch. Fearing she’ll be punished for this power, she hides herself away from the scrutiny of the nuns, determined to discover the secrets of her past so she might better understand the present and where her future lies.

Dylan mac Connall, betrothed of the girl Maere, never forgot that bloody night when he saw his own father murdered as well. Having escaped capture by Eugis’ men, he grows to adulthood under the tutelage of an old woman who helps him discover his own magic. But the magic does not appease his soul and he becomes consumed with hatred and plots of revenge against Eugis, becoming determined it will be he who takes Maere first.

But when Dylan enters the abbey and discovers the woman Maere has become, he finds himself taking on the role of protector when Eugis – aided by the goddess Morrigu and the Viking forces surrounding their lands – makes good on his promise and returns for Maere, setting off a series of events which can only be resolved with one of their deaths.

Growing up in the ’70’s, I read every romance novel I could find, vowing one day to write my own. It took me until the 90’s to start writing seriously, but in the span of about ten years, I crafted four novels, a novella, and many short stories. The first novel I wrote, Hunter Moon, will never be seen. But first novels tend to be that way.
~~~
Teri is both a talented writer and a gifted artist. Her whimsical art can be found on her web site as well. http://www.teribarnett.com/