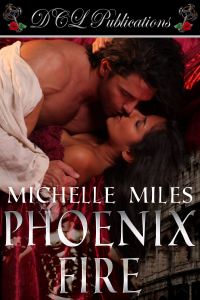 SYNOPSIS:
Kill, or be killed.

Elena Gaius is Hixyl’s most heralded gladiatrix, catching the Emperor’s eye with her unspoiled beauty and fiery temper. Determined to let no man have her, he forces her into a life of unwanted accolades—for slaughter in the Games. With independence out of reach, Elena knows each day could be her last.

Cassius Antonius is a former general hired by an underground secret order to assassinate the Emperor. When he refuses, they take away the only thing precious to him—his freedom. Forced into servitude, he meets Elena and manipulates her into helping him, forming a shaky alliance and a searing romance.

The two become unwitting pawns in the struggle to save Hixyl from the Emperor’s tyranny. But plans spin out of control with the discovery of their secret tryst, and for their ultimate act of betrayal, the Emperor demands one last entertainment—to be pitted against each other in the Games in a fight to the death.

AUTHOR BIO
Michelle Miles found her love of writing buried in the fantasy books of Patricia A. McKillip and the beautiful romances of Victoria Holt. It wasn’t until her high school years she decided to take up the pen and try her hand at writing. She created faraway lands, space adventures, and even princesses who just wanted to be saved. Never learning to plot, she always believed that jumping in feet first was the way to go and has since become a self-proclaimed Pantser, writing sexy contemporaries, sizzling paranormal and sweeping fantasy.

A Native Texan, she loves hockey, baseball, drinking coffee, cross-stitching, and shopping for shoes and Coach handbags. You can read her daily antics at her blog, Ye Olde Inkwell http://www.michellemiles.net/blog Michelle is also a regular contributor to Plotting Princesses http://plottingprincesses.blogspot.com/.