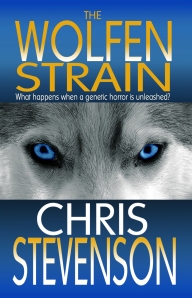 SYNOPSIS:
In a remote compound in Wyoming a geneticist created the first female human-wolf hybrid and adopted her as his daughter. When Melina Salinger discovers who and what she really is she escapes her father’s domain and sets out into the wilderness—any other life would be better than the one that was forced upon her.

Seth Anson, a ranger stationed at the Wheeler Ridge watchtower, is trying to get over a bitter divorce—working in the majestic Shoshone forest is the only way he knows how to get on with his life. Consequently, he is unprepared for the strange and mysterious woman he accidentally shoots and then must nurse back to health. As Seth and Melina form a close bond that leads to something deeper—they have no idea that the geneticist’s other creation—the result of a DNA cloning experiment gone horribly wrong—is bent on finding Melina and committing a monstrous act.

AUTHOR BIO:
Chris Stevenson is a native Californian presently residing in Hemet—the dig site known as “Valley of the Mastodons.” His career has spanned such occupations as automotive mechanic and service manager, government police officer, amateur paleontologist, and newspaper reporter and editor. At the age of 26, he discovered Twilight Zone Magazine and got the urge to write short stories. Shortly after, he entered the L. Ron Hubbard Writers of the Future contest and placed among the finalists. After a whirlwind of initial successes, including his enlistment into the Science Fiction Writers of America, he put pen and paper aside to follow other pursuits. Stevenson has recently taken up splashing ink again, publishing novels and short stories. He has published in nearly every genre and medium in the literary field, except for that illusive screenplay, which he hopes to complete some day.

Q and A with Chris: http://tinyurl.com/8y5pyvn