ONCE UPON A TOWER by ELOISA JAMES (historical romance) 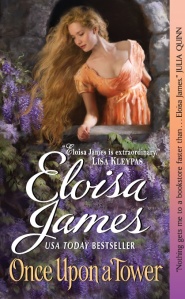 This week’s Revolving Book is the historical romance ONCE UPON A TOWER by ELOISA JAMES!

“Romance writing does not get
much better than this” – People Magazine

SYNOPSIS:
Once upon a time…

A duke fell in love

Gowan Stoughton of Craigievar, Duke of Kinross, values order and self-control above all else. So when he meets a lady as serene as she is beautiful, he promptly asks for her hand in marriage.

Edie—whose passionate temperament is the opposite of serene—had such a high fever at her own debut ball that she didn’t notice anyone, not even the notoriously elusive Duke of Kinross. When her father accepts his offer… she panics.

And when their marriage night isn’t all it could be,
she pretends.

But Edie’s inability to hide her feelings makes pretending impossible, and when their marriage implodes, she retreats to a tower—locking Gowan out.

Now Gowan faces his greatest challenge. Neither commands nor reason work with his spirited young bride. How can he convince her to give him the keys to the tower…

When she already has the keys to his heart?

AUTHOR BIO
New York Times bestselling author Eloisa James writes historical romances for HarperCollins Publishers. Her novels have been published to great acclaim. A reviewer from USA Today wrote of Eloisa’s very first book that she “found herself devouring the book like a dieter with a Hershey bar”; later People Magazine raved that “romance writing does not get much better than this.” Her novels have repeatedly received starred reviews from Publishers’ Weekly andLibrary Journal and regularly appear on the best-seller lists.

After graduating from Harvard University, Eloisa got an M.Phil. from Oxford University, a Ph.D. from Yale and eventually became a Shakespeare professor, publishing an academic book with Oxford University Press. Currently she is an associate professor and head of the Creative Writing program at Fordham University in New York City. Her “double life” is a source of fascination to the media and her readers. In her professorial guise, she’s written a New York Times op-ed defending romance, as well as articles published everywhere from women’s magazines such as More to writers’ journals such as the Romance Writers’ Report.