THE ACCIDENTAL WITCH by JESSICA PENOT (paranormal with romantic elements) 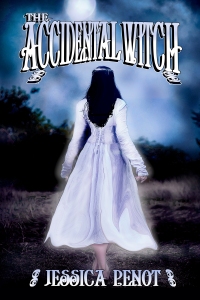 What if you were a witch and didn’t know it?

Phaedra Michaels is a small town psychologist who is beginning to lose hope. Two of her patients at the local hospital in Dismal, Alabama have just killed themselves, she’s still reeling from her divorce and what turned out to be a disastrous marriage, and her father has died, leaving her without any notion of who her real mother is.

Just as Phaedra decides to commit herself to a serious drinking problem and an eating disorder, or two, a mysterious spell book arrives in the mail. Feeling desperate, Phaedra uses it to cast spells to save her fading patients. Suddenly, good things start happening. Phaedra’s patients begin to get better and she even starts dating the sexy doctor from the hospital.

Phaedra is so happy she doesn’t notice the small things that start to go wrong in Dismal, or the dark creatures slithering out of the shadows near her house. When Phaedra finally realizes her spells have attracted every card-carrying demon from hell, she has no choice but to accept help from a slightly nerdy, 500 year-old warlock with a penchant for wearing super hero T-shirts and a knack for getting under Phaedra’s skin. Now, if only she could get the hang of this witch thing, she might be able to save her town.