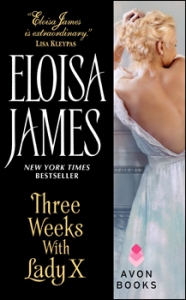 ELOISA is currently running an amazing contest! You can win 1 of 4 treasure chests filled with jewelry!!! (scroll down for details).

BOOK 7 in the Desperate Duchesses series. (You do not need to have read any of Eloisa’s previous books to read Three Weeks with Lady X – but you will want to!)

SYNOPSIS:
Having made a fortune, Thorn Dautry, the powerful bastard son of a duke, decides that he needs a wife. But to marry a lady, Thorn must acquire a gleaming, civilized facade, the specialty of Lady Xenobia India.

But neither Thorn nor India anticipate the forbidden passion that explodes between them.
Thorn will stop at nothing to make India his. Failure is not an option. But there is only one thing that will make India his.

The one thing Thorn can’t afford to lose–his fierce and lawless heart.

CRITICS ARE RAVING ABOUT THREE WEEKS WITH LADY X:
“James’ wonderful cast and effortless plotting make this a delicious romance to be savored again and again.”
~ Publishers Weekly (Starred Review) 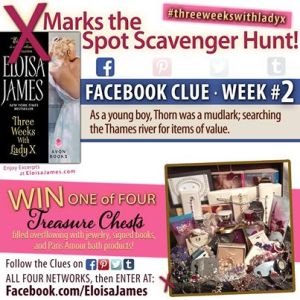 CONTEST: Reminder — WEEK 2 of X Marks the Spot Scavenger Hunt! I’ve dropped clues all over the internet (FB, Twitter, Tumblr & Pinterest) if you find them all, come back here to enter. You could win 1 of 4 treasure chests filled with jewelry! All the details are on the “X Marks the Spot” app here on my fb page. Look for the large pink X for all of the contest details.
**mobile users – you must enter from a browser window or from a computer. The FB app won’t allow you access to the contest app**
#threeweekswithladyx

ELOISA JAMES bio: A reviewer from USA Today wrote that she “found herself devouring [Eloisa’s] book like a dieter with a Hershey bar”; People Magazine raved that “romance writing does not get much better than this.” Eloisa wrote her first novel after graduating from Harvard, but alas, it was rejected by every possible publisher. After she got a couple more degrees and a job as a Shakespeare professor, she tried again, with much greater success. Over twenty best-sellers later, she teaches Shakespeare in the English Department at Fordham University in New York City. She’s also the mother of two children and, in a particularly delicious irony for a romance writer, is married to a genuine Italian knight.

For info about books, visit www.eloisajames.com Or ask a question on Facebook (where Eloisa spends entirely too much time): https://www.facebook.com/eloisajames And then drop in on her very romantic, very Eloisa Tumblr blog, a labor of love: http://eloisajames.tumblr.com/