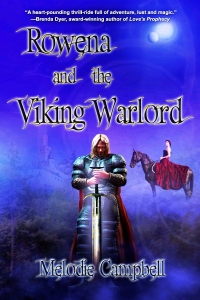 He was her enemy and her lover…

As her cousin Cedric fights battles down south, Rowena unwittingly rides into an enemy war camp, and is taken prisoner by her old friend Lars, who is not what he seems.

Yet Rowena is not helpless. After all, she is a half-witch with a whole lot of magic in her. Too bad she doesn’t know how to use it. Escaping from the camp, she continues to botch up spell after spell. Soon Kendra joins her on the trek back to Huel, along with the latest magical mistake, a flame-burping dragon called Cinders.

When war comes to Land’s End, it brings the one man who threatens to conquer everything in Huel. Her enemy and her lover…the Viking Warlord.

ABOUT THE AUTHOR: Melodie Campbell

Billed as Canada’s “Queen of Comedy” by the Toronto Sun (Jan. 5, 2014), Melodie Campbell achieved a personal best when Library Digest compared her to Janet Evanovich.

Winner of nine awards, including the 2014 Derringer (US) and the 2014 Arthur Ellis (Canada) for The Goddaughter’s Revenge (Orca Books), Melodie has over 200 publications, including 100 comedy credits, 40 short stories, and seven novels.

Melodie got her start writing stand-up. In 1999, she opened the Canadian Humour Conference. Her first book, Rowena Through the Wall, was an Amazon Top 100 Bestseller (All books) in Sept. 2014.

Melodie has a commerce degree from Queen’s University, but it didn’t take well. She has been a bank manager, college instructor, marketing director, comedy writer and possibly the worst runway model ever. These days, Melodie is the Executive Director of Crime Writers of Canada.

STELLAR REVIEWS FOR ROWENA AND THE VIKING WARLORD

“A heart pounding thrill-ride full of adventure, lust and magic. Once again, Campbell has spun words into gold. “

“Edgy, sexy and fast. Leaves you breathless with laughter and craving more.”

“Magic, mayhem and a healthy dose of sensuality make Melodie Campbell’s Rowena books winners. This series will live on my favorites shelf for a long time.”

“Magic and mayhem, demons, a dragon and a Viking who has eyes on more than just Land’s End. Another winner in the Rowena Through the Wall series.”

“Campbell is a writer who can deliver delicious punch lines. She creates a fantastic world with a pregnant heroine who loves her freedom as much as her lusty suitors. Magic.”

5.0 out of 5 stars Melodie Campbell does it again! July 5, 2014
By A.E. Bruce, Amazon Customer
Format:Kindle Edition|Verified Purchase
Rowena and the Viking Warlord is the capstone of Melodie’s Land’s End Trilogy. The funny parts are funnier. The sexy bits are sexier. And the tension is ramped up as Rowena sails a difficult course between duty and love.

The consequences Rowena has to deal with in Rowena and the Viking Warlord make the other adventures look like a walk in the park. Melodie’s research into historical weapons and warfare add weight to the setting. When a soldier is put to death after killing one of his comrades, you can almost hear the heavy axe fall. Equal effort seems to have been put into the creation of the magic in Land’s End. Melodie sets the rules and sticks to them, often sticking it to poor Rowena.

If you’ve read Rowena Through the Wall and Rowena and the Dark Lord, you don’t need me to tell you to pick up Rowena and the Viking Warlord. If you haven’t, buy the whole series and have a great read.

5.0 out of 5 stars Raising the 5-Star Flag! July 3, 2014
By H34me
Format:Kindle Edition
Ever since I picked up the first book in the Land’s End series, I’ve been hooked. Melodie Campbell writes foot-stomping funny, yet romantic endearing, stories that keep me turning the electronic pages well past bedtime.
Comment |

Blog tour being organized! Info will be posted on www.melodiecampbell.com