Eloisa James is one of my favourite authors and she has a new book coming out in March . . . Squee! 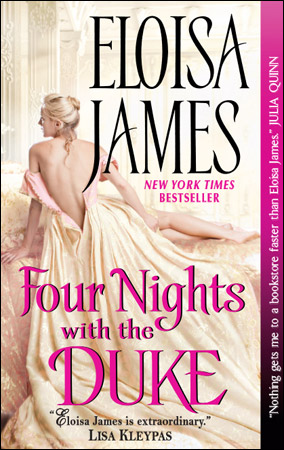 Friday’s Fantastic Find is FOUR NIGHTS WITH THE DUKE by ELOISA JAMES. One of my most favourite authors – Eloisa has a new series called the DESPERATE DUCHESSES BY THE NUMBERS. This is BOOK 2. Be sure to pre-order your copy now. You will love it!

ABOUT THE BOOK:
FOUR NIGHTS WITH THE DUKE:

Book 2 in the Desperate Duchesses by the Numbers series
As a young girl, Emilia Gwendolyn Carrington told the annoying future Duke of Pindar that she would marry any man in the world before him—so years later she is horrified to realize that she has nowhere else to turn.

Evander Septimus Brody has his own reasons for agreeing to Mia’s audacious proposal, but there’s one thing he won’t give his inconvenient wife: himself. Instead, he offers Mia a devil’s bargain… he will spend four nights a year with her.

Four nights, and nothing more. And those only when she begs for them. Which Mia will never do.

Now Vander faces the most crucial challenge of his life: he must seduce his own wife in order to win her heart—and no matter what it takes, this is the one battle he can’t afford to lose.

P.S.: Do you miss the wicked banter between Thorn and India, from Three Weeks with Lady X? Eloisa has a wonderful surprise for you: a deliciously intimate chapter that was cut from Four Nights. Why cut a love scene, you might ask? Well, the truth is that a pregnant India and a seductive Thorn threatened to steal the limelight from Mia and Vander!

To receive this bonus scene, visit Eloisa’s publisher and submit your proof of a preorder of Four Nights with the Duke. They will email everyone the deleted scene via a secret link on April 9, 2015. Don’t miss out!

Do you love the feel and smell of a real book? How about preordering a copy of FOUR NIGHTS from an indy bookstore? BONUS: they have gorgeous signed bookplates that they’ll send along with the book (and they will ship internationally)! http://bit.ly/1ELjkXI

ABOUT ELOISA JAMES:
New York Times bestselling author Eloisa James writes historical romances for Harper Collins Publishers. Her novels have been published to great acclaim. A reviewer from USA Today wrote of Eloisa’s very first book that she “found herself devouring the book like a dieter with a Hershey bar”; later People Magazine raved that “romance writing does not get much better than this.” Her novels have repeatedly received starred reviews from Publishers’ Weekly and Library Journal, and regularly appear on the best-seller lists.

After graduating from Harvard University, Eloisa got an M.Phil. from Oxford University, a Ph.D. from Yale and eventually became a Shakespeare professor, publishing an academic book with Oxford University Press. Currently she is a full professor in the English Department at Fordham University in New York City. Her “double life” is a source of fascination to the media and her readers. In her professorial guise, she’s written a New York Times op-ed defending romance, as well as articles published everywhere from women’s magazines such as More to writers’ journals such as the Romance Writers’ Report.

When I’m not writing novels, I’m a Shakespeare professor. It’s rather like having two lives. The other day I bought a delicious pink suit to tape a television segment on romance; I’ll never wear that suit to teach in, nor even to give a paper at the Shakespeare Association of America conference. It’s like being Superman, with power suits for both lives. Yet the literature professor in me certainly plays into my romances. Many of my novels have obvious Shakespearean resonances. I often weave early modern poetry into my work; the same novel might contain bits of Catullus, Shakespeare and anonymous bawdy ballads from the 16th century. Recent examples are When Beauty Tamed the Beast (2011), which is partly based on “The Love Song of J. Alfred Prufrock,” and The Duke is Mine (2012), which includes some of the earliest extant bawdy limericks.

So I’m a writer, a professor, a mother—and a wife. My husband Alessandro is Italian, born in Florence. We spend the lazy summer months with his mother and sister in Italy. It always strikes me as a huge irony that as a romance writer I find myself married to a knight, a cavaliere, as you say in Italian.

Eloisa regularly interacts with her large fan base through Facebook and Twitter, where thousands of fans come to say hello, exchange comments about her novels, and learn more about an author they come to consider a friend.