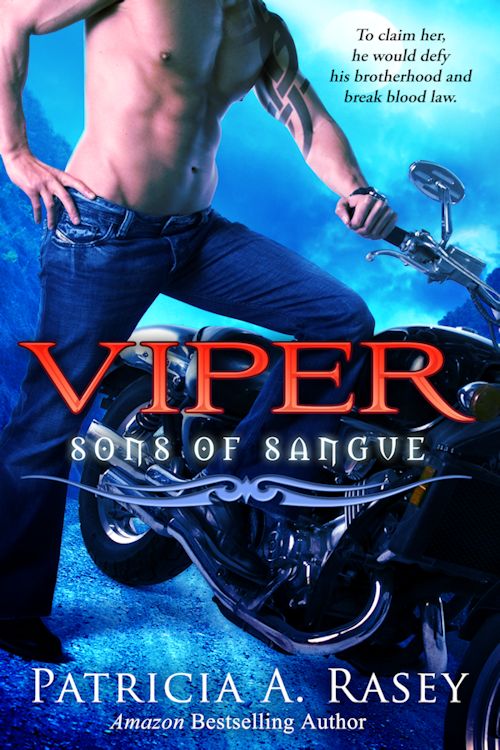 WHAT IT’S ABOUT:
Kane ‘Viper’ Tepes is one of the oldest living descendants of Vlad III. Vampirism is in his blood. So is being the President of the Sons of Sangue. Those who break motorcycle club rules that protect their coven are dealt swift punishment. No exceptions. Until one pretty little detective has him compromising his beliefs, and endangering his position as head of the MC.

Vampirism had Cara Brahnam turning tail and leaving behind her life in Pleasant. Now, ten years later, she’s back as lead detective and wants to see the person responsible for draining the women of Lane County brought to justice, no matter what deal the gang of miscreants has struck with the sheriff. Or the fact that her number one suspect is the sole reason she fled in the first place.

Now someone has targeted Cara as the next victim and Kane must join in the hunt to find the ancient vampire that wants her dead.

“I’d say I was a tad enthusiastic in my summary, but totally necessary. What a fabulous story. Patricia A. Rasey knows how to grab the reader and not let go. Her motley crew of bad-ass bikers leaves the reader wanting more. Viper: Sons of Sangue (Book 1) by Patricia A. Rasey is high octane. A must read for all paranormal fans.” Book Obsessed Chicks.

ABOUT PATRICIA A. RASEY:

A daydreamer at heart, Patricia A. Rasey, resides in her native town in Northwest Ohio with her husband, Mark, and her lovable Cavalier King Charles Spaniel, Todd.

Ms. Rasey is a three-time recipient of the Word Weaving Award for Literary Excellence and a three-time winner of the prestigious RIO Award Of Excellence. She is also a three-time EPPIE finalist and was a 2001 nominee for Romantic Times Magazine’s Best Electronic Book. Additionally, Twilight Obsessions and Twilight Visions, two anthologies she was a part of, was nominated for the PEARL, the Paranormal Excellence Award in Romantic Literature, in the Best Anthology category. Her short story, In The Mind of Darkness won the P&E 2002 Horror short story category.

When not behind her computer, you can find Patricia working, reading, watching movies or MMA. She also enjoys spending her free time at the river camping with her husband and two sons. Ms. Rasey is currently a third degree Black Belt in American Freestyle Karate.