DARK. IMMORTAL. SENSUAL. THEY ARE THE FALLEN GUARDIANS . . . 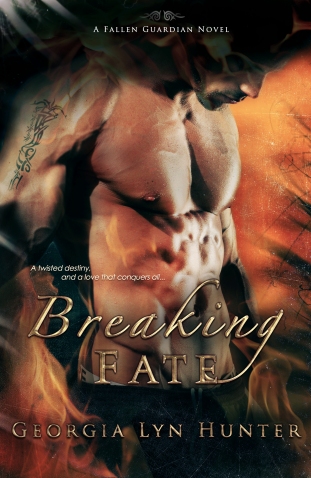 THIS WEEK’S FANTASTIC FIND is the paranormal fantasy romance BREAKING FATE by GEORGIA LYN HUNTER
Book 2 in the Fallen Guardians Series
WHERE YOU CAN BUY IT:
BREAKING FATE:
Amazon: http://www.amazon.com/dp/B0142WTO7Q/r
Kobo: https://store.kobobooks.com/en-us/ebook/breaking-fate
iBooks: https://itunes.apple.com/nz/book/breaking-fate/id1040610079?mt=11
Nook: http://www.barnesandnoble.com/w/breaking-fate-georgia-lyn-hunter/1122663207?ean=2940152355086
Smashwords: https://www.smashwords.com/books/view/577361
WHAT IT’S ABOUT
_______________
An immortal without a soul is bad enough. But when his only tether to remaining honorable is his addiction to bone-crushing pain, it makes Blaéz a dangerously loose cannon.
A Guardian sworn to protect mortals from supernatural evil, Blaéz straddles the edge of darkness as his needs grow. When a good deed brings him to the doorstep of a female unlike any other, one whose touch ignites emotions long lost in the hellish pits of Tartarus, he’s determined not to lose her. She belongs to him. But she’s human. Forbidden. And bringing her into his life may just destroy them both.
Darci Callahan has given up on love. But when a lethally handsome stranger suddenly appears late one night, she finds herself inexplicably drawn to the captivating man with the pale, empty eyes—a man who awakens in her a desire she never believed possible. Except Blaéz brings more than unexpected passion to her life, he brings danger.
In this treacherous new world of gods and demons, Darci soon discovers a heart-shattering truth and the twisted games the gods play. Caught in the crosshairs, she’s forced to accept that, sometimes, no matter how much you love someone, you have to love them enough to let them go…
ABOUT GEORGIA LYN HUNTER:
I’ve been creating stories from the moment I could string two words together. No matter the tale, it always has romance woven through them. Yes, I’m a hopeless romantic. When I’m not writing or plotting new books, I like to read, travel, paint, or troll flea markets where I usually buy things I might never actually use because they’re so pretty—who can resist those displays. After working in a few jobs (all art related), a chosen career as a fashion designer, then an art teacher, I finally found my passion nearly five years ago: writing. There really is no other job I’d rather do. I’m a South AfricaN, but I currently live in the Middle East.
CONNECT WITH GEORGIA LYN ONLINE:
FACEBOOK: https://www.facebook.com/GeorgiaLynHunter?fref=nf
TWITTER: https://twitter.com/GeorgialynH
PINTEREST: https://www.pinterest.com/georgialynh/
GOODREADS: https://www.goodreads.com/auth…/…/6903715.Georgia_Lyn_Hunter
WEBSITE: http://georgialynhunter.com/