She’s investigating a murder. He’s the prime suspect. Their attraction might be deadly. #amreading #romanticsuspense 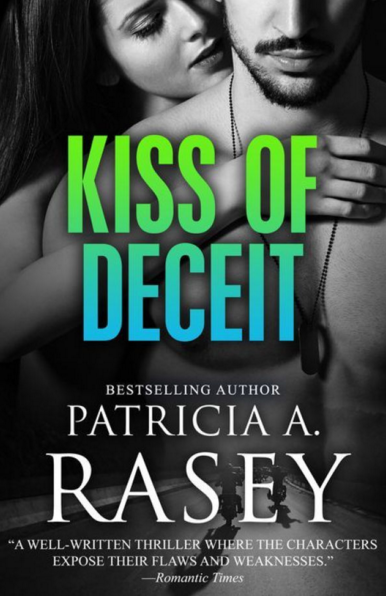 OUR SECOND REVOLVING BOOK SPOTLIGHT is the romantic suspense KISS OF DECEIT by PATRICIA A. RASEY.

GET IT ON SALE FOR .99 CENTS (Limited time only!)
AMAZON: http://amzn.to/1NQPmCc
BARNES AND NOBLE: http://goo.gl/CXdFwT

Marcus “Snake” Gallego lives in the fast lane. Play hard, ride fast, die young. Nothing seems to touch him, that is until his faithless wife turns up dead, and his only hope lies in the detective who slams his head against a bar top, cuffing him.

Detective LeAnne McVeigh has a murderer to catch and Snake is a prime suspect according to her fiancé, the County prosecutor. Snake’s freedom depends on her belief in his innocence. She fights her growing attraction to the bad boy biker, but the pull becomes too strong to ignore. Now they must team up to catch a killer as he becomes her friend in adversity.

“4 Stars…a well-written thriller where the characters expose their flaws and weaknesses. Ms. Rasey has real potential for suspense.”

“I liked this book and would put it on my keeper shelf. It’s not for the faint-hearted and the author gets into the mind of the killer very well. She gives us a riveting story that is hard to put down and you’ll find yourself busy turning the pages to find out the identity of the killer and cheering for the unlikely love between LeAnn and ‘Snake.'”

“…Another racy romantic thriller by Pat Rasey, will keep the heart pounding, the blood boiling, and the most hardened of readers entertained. Combining extremely sexual and sensual moments with the pursuit of a ruthless killer who’s parting deceitful kiss means murder, this novel is a must read.”

Ms. Rasey is a three-time recipient of the Word Weaving Award for Literary Excellence and a three-time winner of the prestigious RIO Award Of Excellence. She is also a three-time EPPIE finalist and was a 2001 nominee for Romantic Times Magazine’s Best Electronic Book. Additionally, Twilight Obsessions and Twilight Visions, two anthologies she was a part of, was nominated for the PEARL, the Paranormal Excellence Award in Romantic Literature, in the Best Anthology category. Her short story, In The Mind of Darkness won the P&E 2002 Horror short story category.

When not behind her computer, you can find Patricia working, reading, watching movies or MMA. She also enjoys spending her free time at the river camping with her husband and two sons. Ms. Rasey is currently a third degree Black Belt in American Freestyle Karate.