Secrets and lies can lead to murder . . . #amreading #EmilyTaylorMysterySeries 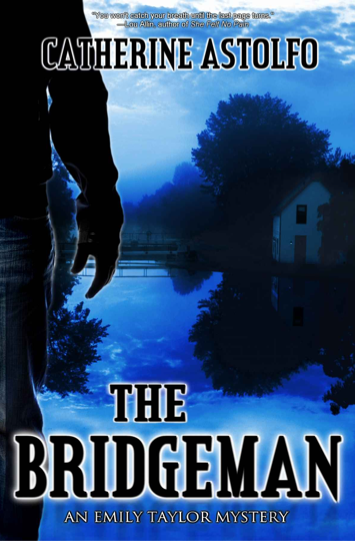 THE BRIDGEMAN: AN EMILY TAYLOR MYSTERY (BOOK 1) by Catherine Astolfo
EXCLUSIVELY AT AMAZON http://amzn.to/1XQCYvV
WATCH THE BOOK TRAILER: http://tinyurl.com/9ya7nu9
She’s the new school principal of a small town with deep dark secrets. And a murderer on the loose . . .
ABOUT THE BOOK:
Some secrets can come back to haunt you . . .
School principal Emily Taylor feels safe in the friendly little town of Burchill—until she finds a body in her school. The murder of caretaker Nathaniel Ryeburn brings back memories she’d rather forget and plunges Emily into a mystery that involves a secret diary, an illegal puppy mill and a murderer cleverly disguised as an ordinary citizen.
As fear rips through the traumatized town, Emily’s investigation inadvertently leads the police to her door, and to her husband Langford, who is hiding a secret of his own. It becomes clear to Emily that many of Burchill’s residents are merely wearing masks. And it’s time for those masks to be ripped away . . . and for a killer’s identity to be revealed.
BUY IT ONLINE:
$2.99 on Amazon Kindle http://tinyurl.com/7rjkpbl
STELLAR REVIEWS:
“You won’t catch your breath until the last page turns.”
—Lou Allin, author of She Felt No Pain
“A story rich in detail with unexpected twists and turns that keep you involved right through to the shocking end.”
—Meredith Henderson, actress, film producer, poet
“Love and depravity, rebirth and rot, veneer and the real wood underneath—Astolfo brings these opposing forces into play as she creates the complex community that is Burchill.”
—Garry Ryan, author of the Detective Lane Mysteries
“After reading The Bridgeman, you’ll want to go home, lock the doors, and hug your pet.”
-Anthony Bidulka, Author of the Russell Quant Mystery Series
ABOUT CATHERINE ASTOLFO:
Catherine is a past President of Crime Writers of Canada and a Derrick Murdoch Award winner (2012). She was a Zonta Club 2012 Nominee for Women of Achievement.
Writing is Catherine’s passion. She can recall inventing fantasy stories for her classmates in Grade Three. Her short stories and poems have been published in a number of literary Canadian presses. In 2005, she won a Brampton Arts Award. Her short stories won the Bloody Words Short Story Award (second and first) in 2009 and 2010. She won the prestigious Arthur Ellis Best Short Crime Story Award in 2012.
Catherine’s novel series, The Emily Taylor Mysteries, are published by Imajin Books and are optioned for film by Sisbro & Co. Inc. Visit Catherine at http://www.catherineastolfo.com.
CONNECT WITH CATHERINE ASTOLFO ONLINE:
www.catherineastolfo.com
www.katywords.blogspot.com
https://twitter.com/cathyastolfo
https://www.facebook.com/cathy.astolfo
https://plus.google.com/116263954589831804470
www.amazon.com/author/catherineastolfo