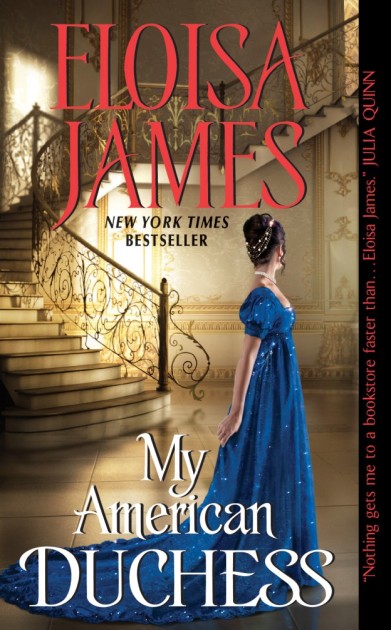 ELOISA JAMES’ luscious new historical romance MY AMERICAN DUCHESS
IS OUT TODAY!
WHERE YOU CAN GET IT:
Kindle: http://amzn.to/1OR0qk8
Nook: http://bit.ly/1QAKaEU
iBooks: http://apple.co/1OaZkm0
Google Play: http://bit.ly/1M7gJsL
Kobo: http://bit.ly/1gmJGFz
Excerpt: http://bit.ly/1Ns1FYj
WHAT IT’S ABOUT:
The arrogant Duke of Trent intends to marry a well-bred Englishwoman. He wouldn’t even consider Merry Pelford, a madcap heiress who has made herself infamous by jilting two fiancés.
Besides, Merry is in love with his dissolute younger brother—and this time, the former runaway bride has vowed to make it all the way to the altar.
But as Trent and Merry discover, love has a way of complicating their perfect plans . . .
About ELOISA JAMES:
New York Times bestselling author Eloisa James writes historical romances for HarperCollins Publishers. Her 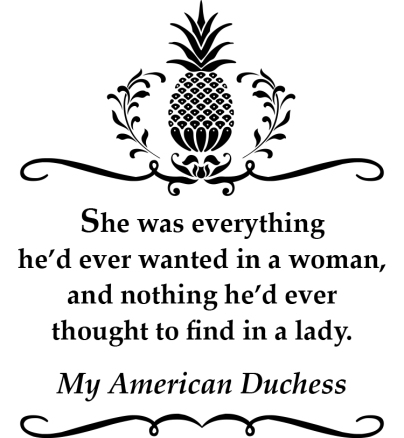 novels have been published to great acclaim. A reviewer  from USA Today wrote of Eloisa’s very first book that she “found herself devouring the book like a dieter with a Hershey bar”; laterPeople Magazine raved that “romance writing does not get much better than this.” Her novels have repeatedly received starred reviews fromPublishers’ Weekly and Library Journal and regularly appear on the best-seller lists. After being a finalist for a RITA—the top award in the genre of romance fiction awarded by the Romance Writers of America—over ten times, she won in 2013. In 2014, Eloisa was awarded a career achievement award by Romantic Times Book Review.
Connect with ELOISA JAMES online:
https://www.facebook.com/eloisajames
https://twitter.com/eloisajames
http://www.pinterest.com/eloisajames/
http://eloisajames.tumblr.com/
http://instagram.com/eloisajamesbooks
https://www.goodreads.com/EloisaJames