What does a mysterious plane crash from forty years ago have in common with a recent murder? One killer. #amreading #mystery #murder 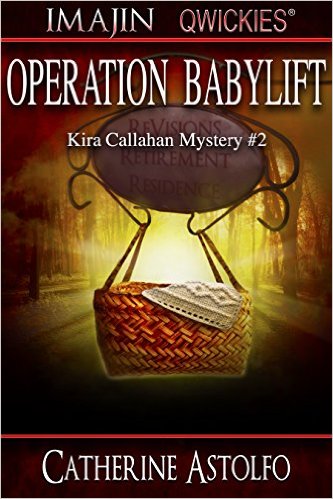 TODAY’S REVOLVING BOOK IS the cozy mystery novella  OPERATION BABYLIFT by CATHERINE ASTOLFO. A Kira Callahan Mystery #2. Get it on amazon for only .99 cents! http://amzn.to/1XxZlUV
WHAT IT’S ABOUT:

When Florence Kensington gives up her coveted spot at ReVisions Retirement Residence to newcomers Roy and Linh Jackson, she unknowingly awakens Kira Callaghan’s Vietnam memories—and her PTSD. However, Kira’s “inner retired journalist” has no choice but to investigate when Florence is found dead.

With help from the Flower Pots and her boyfriend Charles, Kira travels from Chit Creek to Burlington, Vermont, and exposes the secrets surrounding an Operation Bablylift plane crash from forty years ago. Discouraged by the lack of progress on the case, she returns to Triple R with her team of aging acolytes.

Little do they know that a killer has followed them home…

Catherine Astolfo is an award-winning, Canadian best-selling author of mystery and psychological suspense. Her short stories and poems have been published in a number of Canadian literary presses. Her story, “What Kelly Did”, won the prestigious Arthur Ellis Award for Best Short Crime Story in 2012.

In the fall of 2011, she was thrilled to be awarded a four-book contract by Imajin Books for her Emily Taylor Mystery series (The Bridgeman, Victim, Legacy, and Seventh Fire).

Her most recent novel from Imajin Books is Sweet Karoline, a psychological suspense. Sweet Karoline hit the top ten of Amazon Canada on its first day of release.

She is also the author of an ebook novella series, the Kira Callahan Mysteries, Up Chit Creek and Operation Babylift. Catherine also writes film scripts.

Catherine’s books are gritty, yet portray gorgeous surroundings; they deal with sensitive social issues, but always include love and hope. They’re not thrillers, but rather literary mysteries with loads of character and setting. And justice always prevails.

CONNECT WITH CATHERINE ON SOCIAL MEDIA: