She’s a rookie, he’s a cynic. When they met it was murder. DEADLY LEGACY #freeonamazon #amreading #mystery #thriller #romance 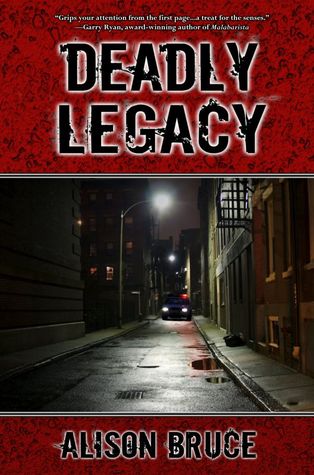 TODAY’S REVOLVING BOOK is the mystery DEADLY LEGACY by ALISON BRUCE. A Carmedy & Garrett Mystery Book 1. Get it #FREE ON AMAZON.

and other Amazon sites worldwide

Also available in paperback on Amazon.

ABOUT THE STORY:
In 2018, rookie detective, Kate Garrett lives in the shadow of her near-legendary father Joe. When Joe dies unexpectedly, he leaves Kate half interest in Garrett Investigations, his last case that ties to three murders, a partner she can’t stand, and a legacy to live up to.

It was no longer raining. It made no difference. Detective Kate Garrett was already soaked and mud oozed over her shoes as she picked through the bushes in the overgrown industrial lot, looking for evidence of illegal drugs.

“Ah, the romantic life of a police detective,” Kate said, echoing one of her father’s favourite sayings. A wet branch slapped her in the face and reminded her that a girl’s life hung on the work she was doing.

Meanwhile, the instigators of this search were wrapped in blankets, each waiting in the back of separate squad cars. She hoped they were in their own private hells, worrying about what was going to happen next. Perhaps the prospect of imprisonment chilled them as much as the grey November afternoon chilled her.

She doubted it. They were probably pissed off they’d been caught.

STELLAR REVIEWS:
5.0 out of 5 stars
By Gail M Baugniet, Author of For Every Action
Deadly Legacy is an honest to goodness Mystery patterned after early mystery writers Agatha Christie, Arthur Conan Doyle, and Edgar Allan Poe. The story, however, is set on 21st century Canadian soil. http://tinyurl.com/bkrzwcr

Bruce writes a novel, which grips your attention from the first page. There is romance, grief and a complex plot. It has grim crime scenes, the unexpected beauty found in the dark corners of a city, vividly realistic characters and an irreverent sense of humour. In other words, it’s a treat for the senses.

This is a great read. Alison Bruce’s Kate Garrett is a wonderful, complex, intelligent and realistic character. Then Bruce surrounds Kate with other quirky personalities. As a result, the reader is along for the hunt while Kate tracks a poisonous predator. ~ Garry Ryan, author of Malabarista.

Alison Bruce writes mysteries, romantic suspense and historical western romance. Her protagonists are marked by their strength of character, sense of humor and the ability to adapt (sooner or later) to new situations. Three of her novels have been finalists for genre awards.

Copywriter and editor since 1992, Alison has also been a comic book store manager, small press publisher and web designer. In addition to writing, she is the Publication Manager of Crime Writers of Canada, Arthur Ellis Awards Administrator, and part-time tech guru to the technologically challenged.