THE HAT by BABETTE HUGHES (murder/mystery)

Friday’s Revolving Book is the mystery THE HAT by BABETTE HUGHES.
GENRE: Murder/Mystery/Romance/Historical

The Hat received first prize for Historical Fiction from the Texas Association of Authors.
BUY IT ONLINE:
Amazon: http://tinyurl.com/cad86bp
Barnes and Noble: http://tinyurl.com/bqeywt4
PUBLISHER: Sunstone Press http://www.sunstonepress.com/
SYNOPSIS: “The Hat” has its roots in personal history. What lends this novel its authenticity is that its author, Babette Hughes, is the daughter of a bootlegger who was murdered by the Mafia when she was an infant. Hughes (née Rosen) spent years piecing together her father’s bootlegging career and murder, despite her mother’s attempt to hide the truth. “The Hat” draws directly on the drama of Hughes’s search for the truth, as told in her acclaimed memoir, Lost And Found. The novel begins in 1931 with the brief, chilling murder of the godfather of the Jewish bootlegging world, Ben Gold. The killer disappears without a trace and Chapter Two, in flashback, introduces Kate Brady, who has just been fired from her Depression-era job working at Shapiro’s Bakery. She has little hope of a future until she meets the magnetic, wealthy Ben Gold, who immediately identifies her as his future wife. They marry in a brilliantly described wedding.

The charged love affair between Kate and Gold’s employee, Bobby Keane, and their struggle to escape the dangerous Gold, is revealed later in the book. Ultimately, “The Hat” is the story of Kate’s struggle for lost innocence, selfhood, and freedom. Of courage in the struggle with evil. Of bravery in the face of danger. And of being led into daylight
by the restoring power of love.

“For Babette Hughes, writing has been her lifeline. The words that spill forth during her daily writing practice turn her past trauma and heartaches into art. Hughes’ latest work, “The Hat” is no exception.”
—- The Jewish Outlook

”This is a terrific story that chronicles the beginning of the Mafia and its revelations that profoundly changed lives forever.”
—-Jewish Book World 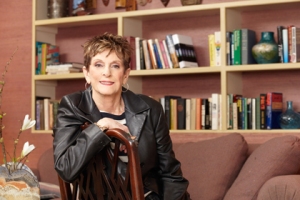 AUTHOR BIO:
Babette Hughes, author of “The Hat” and “Lost And Found”, and co-author of “Why College Students Fail”, has also been published in the Saturday Review; she’s been Contributing Editor of Cleveland Magazine; a twice-weekly columnist for the Cleveland Press; and has published articles and book reviews in the Cleveland Plain Dealer and the Sunday Magazine. She has also written, produced and appeared in television documentaries and news and feature stories for Cleveland television stations WKYC-NBC and WNBK-UHF.

In addition to her writing career she was National Director of Women’s Political Action for Hubert Humphrey in his 1972 Presidential campaign, as well as founder and President of Discover Yourself, Inc., a motivation and self realization program for women. She was also Director of Public Relations for Revco D.S., Inc. in Twinsburg, Ohio, and Account Executive with Frazier Associates, in Washington, DC. She and her husband live in Austin, Texas, and are the parents and step-parents of eight children.

She is currently working on a sequel to “The Hat”, “The Scarf”.

HALF PAST MOURNING by FLEETA CUNNINGHAM (romantic suspense)

Danny Wilson and his 1955 Thunderbird disappeared one hour after his wedding to Nina Kirkland.  When Peter Shayne buys a pristine T-Bird and finds Danny’s driver’s license concealed in the trunk, he comes to Nina’s door with a cloud of questions.  Once he meets her, the first question is…is Nina Danny’s wife or his widow? To find the answer Nina and Peter delve into Danny’s secret life, search for clues in the world of antique cars, and face dangerous consequences as the past unravels. With her attraction to Peter growing, Nina discovers how little she actually knew Danny and wonders if she can trust her own judgment. Peter, seeing her confusion and sensing her pain, knows he must be patient. He loves her but the past clouds his hope for a future together. Nina still must deal with her broken dreams and is only HALF PAST MOURNING.

“A masterful job of bringing the reader back to

small-town Texas in the fifties. She has the values

and prejudices of the era down pat, and the

and full of romance, drama, and a bit of suspense.”

“One of the most fantastic books I’ve read this

year…grabbed my attention from the first sentence…

A memorable, entertaining, and well-written story…

An author of increasing distinction who will never

hero and a wounded yet proud heroine. A realistic

picture of 1957…an image of small town America

that both warms and terrifies… The best thing is she

balances the buildup with a really good ending.”

“A special treat! Subtly endearing and

thoroughly thought-provoking, The plot deals with

characters… This is one for the keeper shelf.”

“I was so engrossed in the story I did not notice

story even more real and alive.”

characters… The love between the two main

characters is precious, from the beginning to the

final, exciting conclusion… I am now determined to

read the rest of the series.”

Fleeta Cunningham began writing at the age of eight, but she was telling stories before she was old enough to write them down, much to the dismay of various relatives who found her ‘tall tales’ less than believable. She found an outlet for her active imagination when a high school English teacher took an interest in her stories and class writings and suggested she join the school newspaper and yearbook.  After taking a degree in English Literature from Texas Tech, Fleeta was accepted at the University of Texas where she took a master’s degree in Library and Information Science. She began her career as a law librarian with the State of Texas and later worked with two major law firms in Houston. During those years she wrote a column for her professional newsletter, contributed to a number of publications for the legal industry, and sat on the advisory board of two publishers.

Following her time in the world of litigation, contracts, and torts, Fleeta returned to her home in Central Texas where she taught Enlish and history in a small private school for several years. The urge to write again became too strong to ignore. Since turning her energies to writing full time in 2006, Fleeta has had four books accepted for publication as well as articles and short stories.

A fifth generation Texan, Fleeta Cunningham has lived in a number of small Texas towns. Drawing on all of them, she created the fictional town of Santa Rita and its inhabitants. The Santa Rita Series includes  DON’T CALL ME DARLIN’, BLACK RAIN RISING, ELOPEMENT FOR ONE and HALF PAST MOURNING.  When she isn’t writing, she gives workshops and classes in creative writing. She is a frequent speaker at programs and community events. She also serves as the wedding coordinator for her church and chief housekeeper for her feline roommates.

BOOK SIGNING: Book signing for HALF PAST MOURNING  Baxter’s on Main, Bastrop, Tex, 2/15/12 and others to be arranged

Danny Wilson and his 1955 Thunderbird disappear one hour after his wedding to Nina Kirkland.  When Peter Shayne finds Danny’s driver’s license concealed in the trunk of his new car, he offers Nina fresh lines of inquiry. When she learns Danny planned to escape his domineering mother for a life of his own choosing, Nina doubts her own judgment. If she was so wrong about Danny, can she trust this new man in her life? Against the background of exotic cars and an antique auto museum, she searches for clues. She must learn what happened when Danny walked away from the wedding. Then she can admit her growing attraction to Peter. Is Danny hiding from a marriage he didn’t want? Or is there a more sinister explanation? Peter vows to help the girl he loves, even if he might lose her. Only then will they know: Is Nina married or not?