Tag Archives: I MARRIED THE DUKE

I MARRIED THE DUKE by KATHARINE ASHE (historical romance) 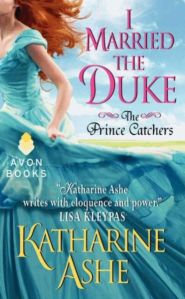 Friday’s Fantastic Find is the historical romance I MARRIED THE DUKE by KATHARINE ASHE.

She thought he was a pirate. He thought she was a governess. Two wrongs have never made such a scandalously perfect right.

On the way to marry a prince in a castle a lady should never:

Bribe an infuriatingly arrogant and undeniably irresistible ship captain,
Let him kiss her senseless on a beach,
Battle assassins at his side, or
Exchange wedding vows with him, even under the direst circumstances.

But daring, determined Arabella Caulfield isn’t just any lady. And Luc Westfall is no ordinary shipmaster. He’s the new duke of Lycombe, and to defeat a plot that could destroy his family he must have an heir. Now he knows just the woman for the job . . . and he’s not above seduction to turn this would-be princess into a duchess.

Much Love, Definitely Recommending “If this first novel in The Prince Catchers series is any indication, I will anxiously await the next two books… It’s a story that’s riveting, colorful and so much better for all the twists and turns. Well written, well thought out, highly recommend.” — Bookishly Attentive

TOP PICK! “The Prince Catchers series begins with a bang. … well written, carefully plotted, and original. Ashe intrigues readers with an adventure, a romance and a mystery, all of which will keep them eager for the next installment.” – RT Book Reviews

“Fast paced and passion filled with plenty of action and adventure. … I loved it! Well done indeed!!” — My Book Addiction Reviews

In 2012 Amazon chose Katharine’s How To Be a Proper Lady as one of the Ten Best Romances of the Year. Upon the publication of her debut in 2010, the American Library Association named Katharine among its “New Stars of Historical Romance”. She is a two-time nominee and 2011 winner of the Reviewers’ Choice Awards for Best Historical Romantic Adventure, and her novella A Lady’s Wish launched HarperCollins Publishers’ Avon Impulse imprint in 2011. Her books have been recommended by Woman’s World Magazine, Booklist, Library Journal, Barnes & Noble, the San Francisco & Sacramento Book Review, Durham County Libraries, and the Library of Virginia.

Katharine lives in the wonderfully warm Southeast with her husband, son, dog, and a garden she likes to call romantic rather than unkempt. A professor of European history, she has made her home in California, Italy, France, and the northern US. She adores hearing from readers.