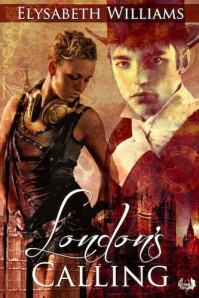 SYNOPSIS:
Wanted for murder, with a missing alibi, what’s an out-of-work burlesque dancer to do?

A burlesque dancer at London’s exclusive Miss Merriweather’s, Delilah Knightly is abruptly fired after her costume falls apart twenty feet above the stage. Minutes after she packs her trunk and flounces out, her boss is murdered. Delilah’s only alibi, a handsome stranger she fell over in an alleyway, vanishes. When she returns to speak with the club’s owner, Delilah is hauled away by the police. Confused and hopeless, she must sit in her dingy cell until Jillian Johnsworth, the owner of Merriweather’s, vouches to keep her until trial.

At Ms. Johnsworth’s estate outside London, Delilah is introduced to peculiar workings that London Society’s strict protocols would never sanction. Amidst the secrets, the group of women and their male counterparts show her a life she never would have experienced elsewhere. With them she finds adventure, love, laughter, and something she has never truly dared hope for: family. If they can find that pesky missing stranger with the stark gray eyes and flush out the real murderer, all just might fit into place.

AUTHOR BIO:
Elysabeth Williams is the author of romance and steampunk and writer of other oddities not yet in paperback. Her first release, a historical, time travel romance ­ DEVIL IN A RED KILT – was published in August of 2010 and her steampunk romance – THE ELECTRIFYING EXPLOITS OF THE ENGLISH THREE­ was released in January of 2011. Elysabeth resides in the southeast with her family and hates the heat. She drinks coffee even when it’s hot, hates chocolate and loves sweet tarts.